It's been a while since I last posted.  I've done several wilderness trips since my last post, and have two new kayaks with another one that should be finished by year end.

My 18 foot cedar strip kayaks weigh about 56 pounds.  This is heavier than I expected but lighter than my last ones.  They are also larger than my last ones, and lots of leg room and space for gear.  I'm 6' 3" tall so its really nice to have the extra room.  I can kayak for hours without my legs getting stiff, cramped, or falling asleep.  These are larger and lighter than any other 18 foot kayak I've found.

I also designed the cockpit to fit and balance on my shoulders.  I've been using small portage pads, which work well on short portages.  They begin to hurt on portages that exceed a half mile.  I have a full portage yoke that I use on my canoes.  I'm going to use it on future trips.  I expect to be able to portage a 56 pound boat at least one mile before needing a rest.  Of course, I'll use portage wheels when ever possible.

I'm currently building a 16 foot kayak of mostly my own design.  I just fiberglassed the hull this afternoon.  I should have it finished by year end.  I'm curious about how much it will weigh.  I'm hoping that it weighs less than 50 pounds, which I think it a reasonable assumption.  I've been planning on creating a list of material weights so that I can reasonably estimate the weight of a kayak before I build it.

One of my next projects will be to build portage wheels.  With about 50 miles of portages, it would be nice to have wheels that fit under the center and can carry the kayak and gear.  I'd like to be able to step out of the kayak, slip on the wheel, and go.  I have a few ideas to try.  I think the pull lines should be attached directly to the portage wheels to prevent the wheels becoming skewed when you hit a bump in the trail. 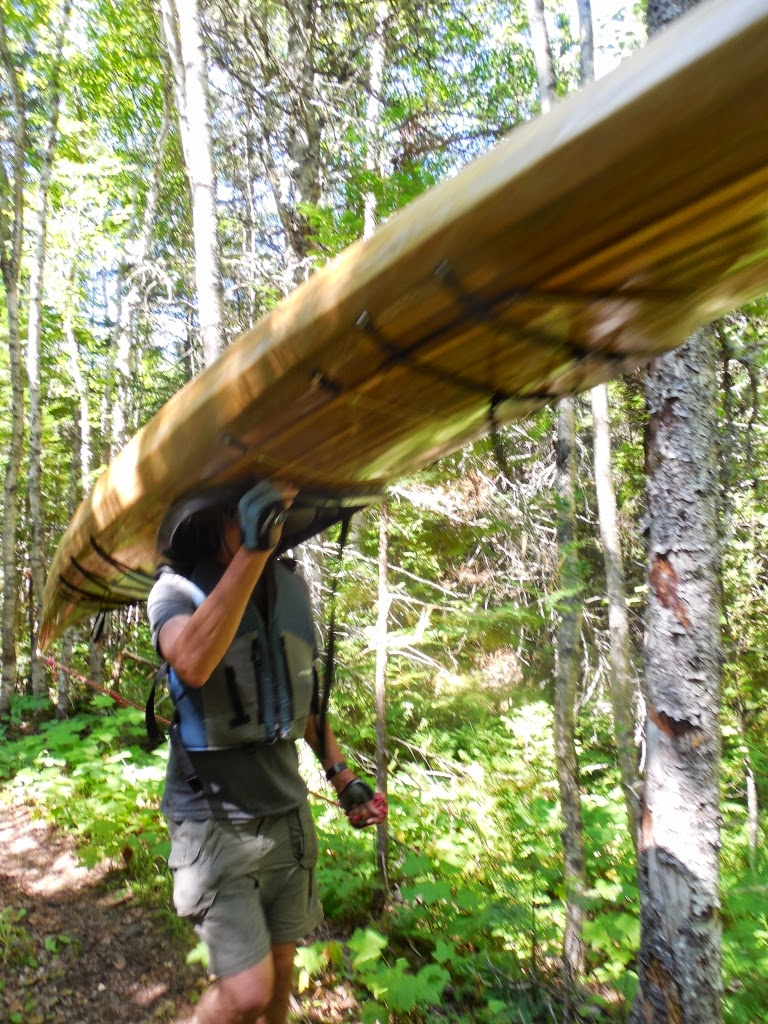 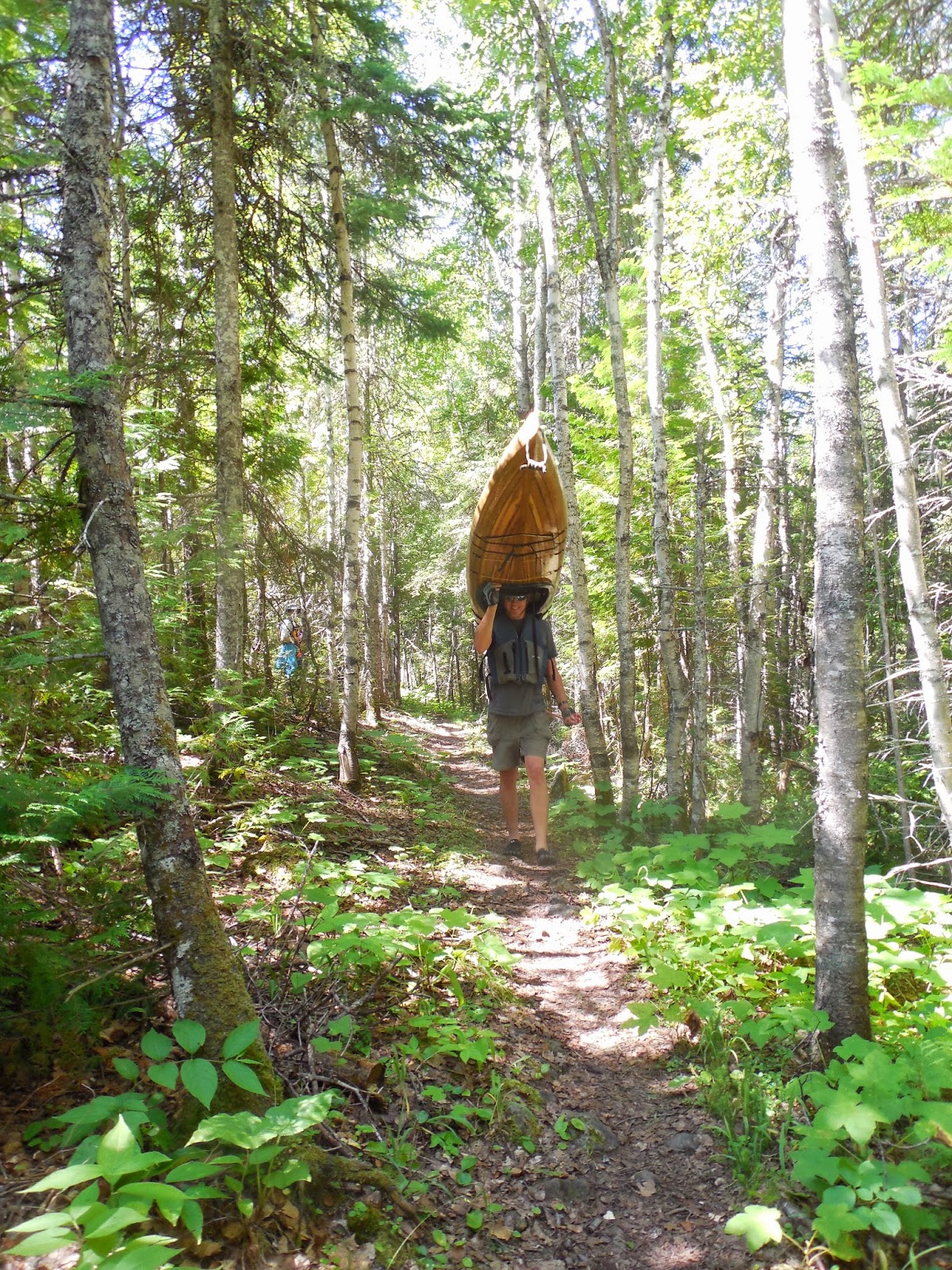 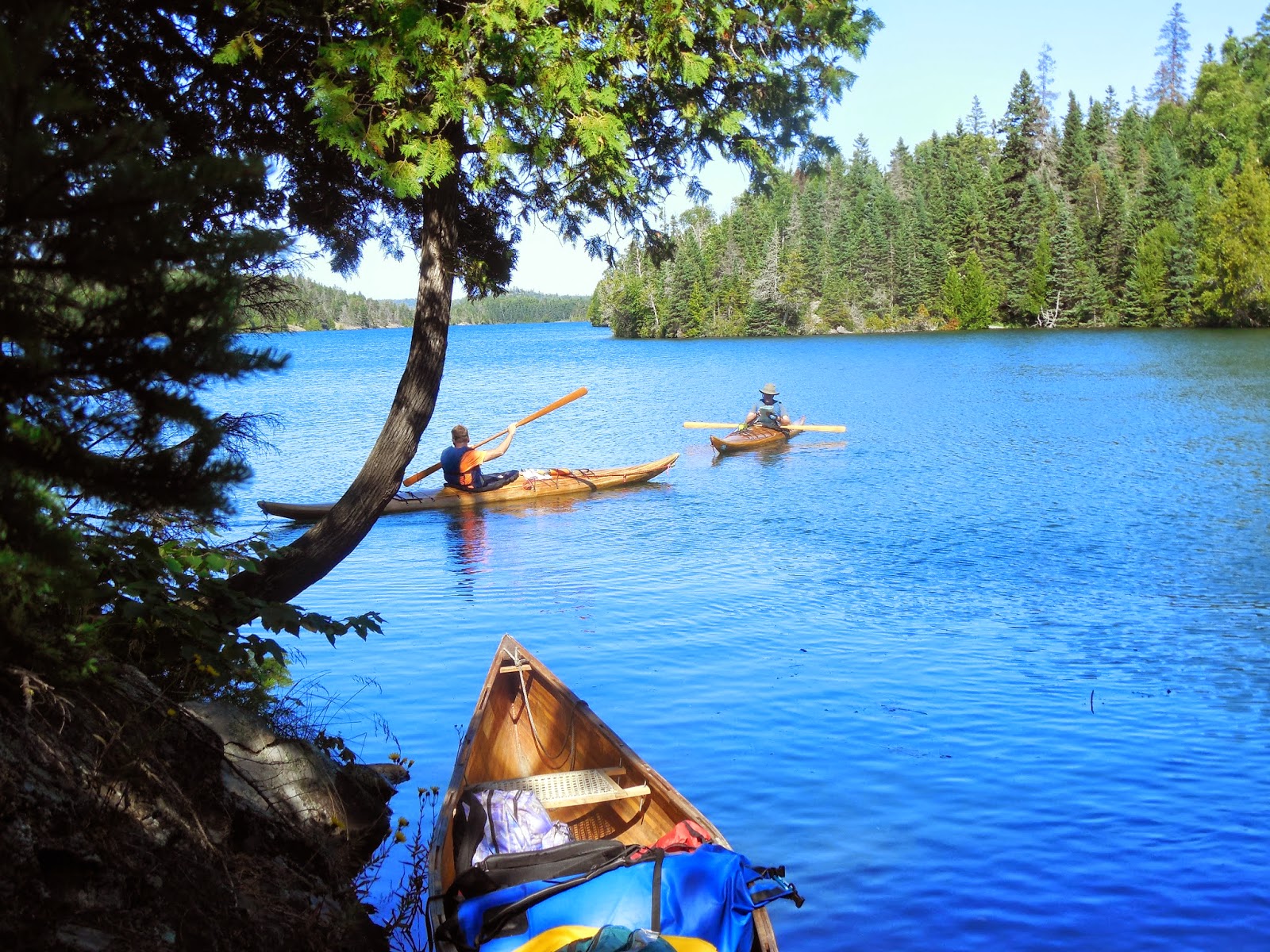 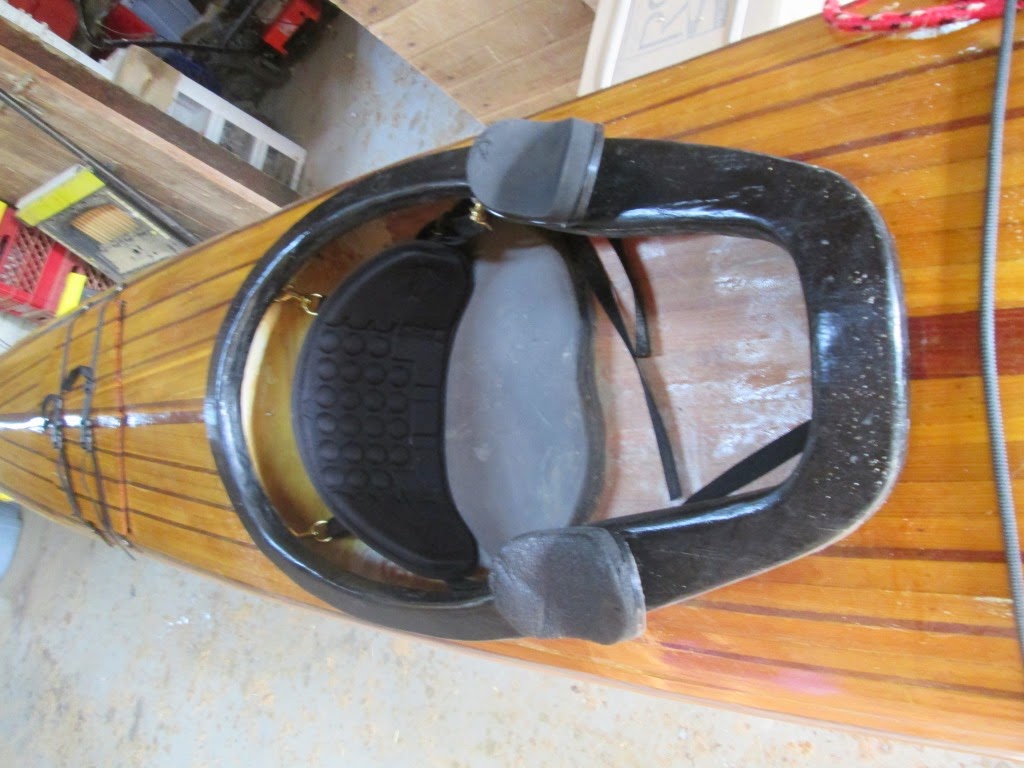 Could there be a karmic balance to the universe?  Is too much good karma necessarily followed by a little bad karma to keep the universe in balance?  I had an incredible kayaking trip to Cape Lookout National Seashore last week followed by a really productive weekend working on the new kayak.  And then this week, every machine I touch seems to malfunction.  I also seem to be making very stupid and time consuming mistakes on the new kayak, but fortunately, nothing that I can not fix.

Last week was my first time to Cape Lookout National Seashore.  I've been looking at it on Google Earth for over a decade wondering what it was like.  I was hoping to have the new kayak done by June 1st so that I could take it for a test run in the Boundary Waters Canoe Area (BWCA) of northern Minnesota, but when that did not happen, I changed my plans at the last minute.  I have two friends who live in the southern states.  We were all going to meet up in or around Duluth, MN on June 1st.  It seemed like a better plan to kayak Cape Lookout instead of the BWCA.

Not only was Cape Lookout a beautiful and challenging place to kayak, it could possibly have been even more remote than the BWCA.  There were nights that we camped on the beach and I doubt there was another person within about 4 miles of us.  I love watching the tide.  We had one afternoon where we were stuck on a tidal flat for three hours waiting for the tide to come in.  Once it did, the water rose quickly lifting us and carrying us down to our next campsite.

OK so now on to the bad karma.  I broke two lawn mowers recently along with my band saw.  This evening, I fixed two separate problems with my band saw only to realize after I spent a couple hours cutting out parts that I used plywood of the wrong thickness.  Yeah, I know, this is really stupid.  I might be able to plane it down to a thinner thickness, but I'm not going to attempt that while I'm feeling the bad karma coursing through the universe.  I'll do that tomorrow night.

As for the weight of the new kayak, I can easily lift both the hull and deck.  I did not weight it, but it will be very portagable when finished.  I'm designing the cockpit shape so that it will rest on my shoulders without needing a portage yoke. 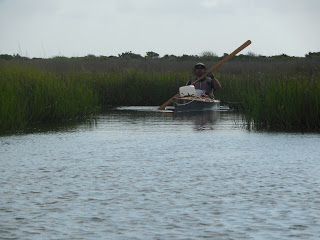 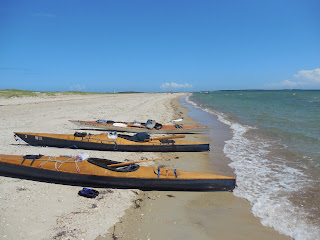 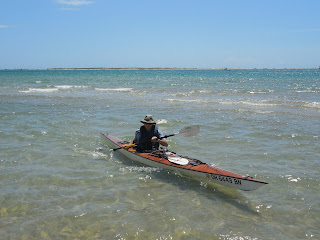 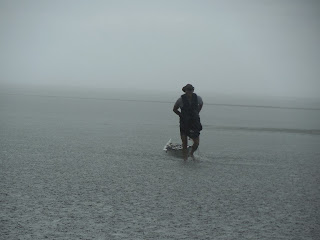 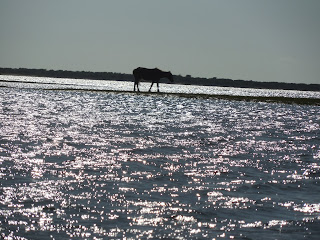 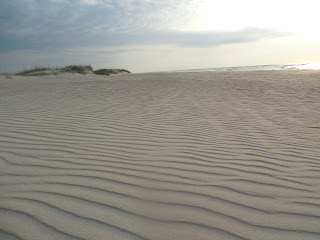 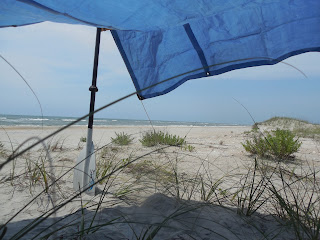 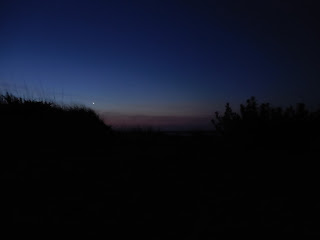 I was hoping to have the new kayak complete for a week long kayak trip to Cape Lookout National Seashore starting on June 1st.  That doesn't seem possible now.  I had some delays because of uncertainty in the construction process.

The problem I encountered was that I took the hull off the form before starting the deck.  I thought that I would be able to build the deck to the shear line I drew on the forms.  I realized too late that I would never be able to accurately do this.  So I put the hull back onto the form to use it as a guide.  The hull fits loose on the form so accuracy is still a concern.  However, I think I can manage any inaccuracies.

I have the hull built and fiberglassed.  Its weight is low enough that a 41 pound total completed weight is very possible.  I can easily portage 41 pounds.

The first one of anything is always the hardest.  Now that I better understand the process, I will build another kayak as soon as I finish this one.  The next one should go much faster.  I would also like to build a light weight small kayak for doing day trips on Lake Erie. 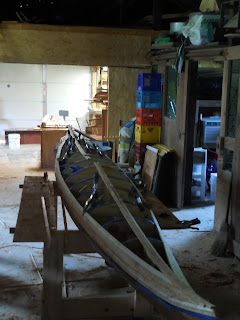 After a long and cold winter, it has finally warmed enough to start working on my new kayak again.  I finished planking the haul on Sunday.  I should be able to sand and fiberglass the haul next weekend.  Then, I will turn the mold over, and plank the deck.  Once the deck is finished, I will join both halves together.

My goal is to have the kayak done for a trip to the Boundary Waters in northern MN by June 1st.

I was planning on doing a thru paddle of the NFCT in 2014, but one of my friends has talked me into a 300 mile trip on the Yukon River in Alaska next summer.  I don't think I can pass up a trip like that!  He's still in the planning stages so there is no definite plans yet.  He tends to be slightly monomaniacal when it comes to wilderness trips so I know I can count on him to figure out the logistics. 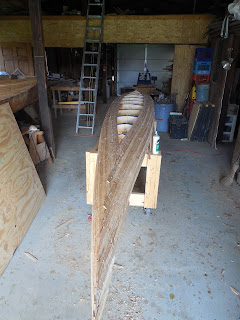 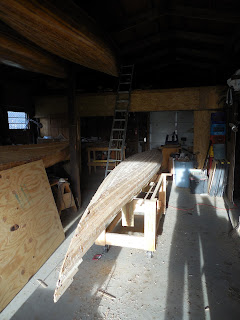 The skeleton of my new kayak is complete.  Actually, this is just the mold of the new kayak.  The forms will be removed after the deck and hull are formed.  I think everything is ready to start stripping the kayak.  I'm trying a new technique with stripping this kayak.  I've used a router to bead and cove the edges of the cedar strips, which should help them fit into place.  Previously, I've used a plane to fit the edges together.  The bead and cove should make the stripping part go much faster.


This is the first cedar strip kayak I've build so I want to take my time getting it set up.  I know the deck and hull are build separately, but I'm not sure how the deck and the hull will fit together.  I have the general idea, but I also know the devil is in the details.  I'm not sure how closely the deck and hull have to match or what some of the potential problems might be when trying to fit them together.  However, I've built enough different kinds of boats to feel confident that I will figure it out when the time comes. 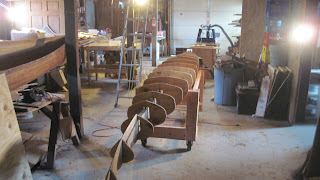 I am at last free from my burden of building a new patio, and ready to start a new kayak.  A friend gave me some old street paving bricks that his grandfather collected after the Cleveland World Fair in the 1930s.  I could not pass up such a find!  This was a very time consuming project that I've been working on since mid summer.  At last I am free!

I bought the plans for the Gullimot L, which is an 18 foot long cedar strip kayak.  I am tall, and this model seems to have more leg room than most of the other kayaks plans I've seen.  It should also weight about 41 pounds when done.  I plan to start cutting out the forms this weekend.

My plan is to position the cockpit so that the kayak will be balanced on my shoulders, and I can portage the kayak on my shoulders when necessary.  I have a solo 45 pound canoe that I can comfortably portage on my shoulders for a half a mile, and uncomfortably up to about a mile or more.  The kayak I brought on this years trip weighed about 66 or 67 pounds.  It was just too heavy to portage very far.  It was also too heavy for my portage wheels, which bent and finally broke.

I'm going to try to finish the kayak by May 2013 so that I can do a test run in the Boundary Waters of northern Minnesota at that time.  This year's NFCT trip taught me that portaging a kayak can be fairly easy if you have all of your gear in small dry bags that can be easily transferred into a large Duluth pack for transport.  I have some ideas for making portage wheels for my next NFCT through paddle.
Posted by Joe at 1:08 PM No comments:

I forget to mention that just before taking my kayak off the wheels to load it on my truck, they failed catastrophically.  Since I would not have a reason to ever put them back on the kayak, I decided to see if I could figure out why they were so wobbly.  As I was moving them around to find the slack, a bolt broke and the entire system fell apart.  I had put very little pressure on the wheels.  They would never have made even one more portage before failing.  I am incredibly shocked to have the good fortune of having this failure 10 feet from my truck and not on a portage someplace.  Had this happened on a portage, I would have had great difficulty in getting back.  This reinforced my idea on having a kayak that is easier to portage on your shoulders.

It also reinforced my instinct of leaving the NFCT until I have a better portage system.  My instinct told me that it was not safe doing a solo trip with a questionable portage system.  There are too many other potential problems that will require a functional portage system.  In the event of severe weather, injury, or illness, I would need to move quickly and with as little difficulty as possible.  I could not do this with my current portage system. 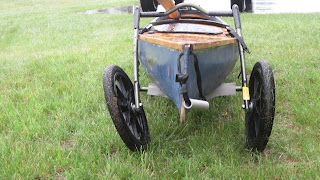 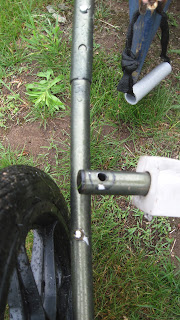 Portage system after Failure
Posted by Joe at 9:08 AM 3 comments: